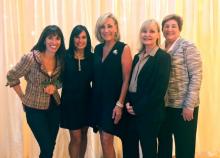 NEW YORK – Susan Willis, managing partner of post company Cutting Room Films, assembled a group of NYC’s top female voices in advertising for a screening of Five Awake, the short documentary she directed and produced with activist Donna Dees. The documentary chronicles the journey of five Louisiana women who sought to change the state for the better by pushing through a historic legislative package to protect the victims of domestic violence and save lives. The screening, held at the Helen Mills Theater in Manhattan, also featured a panel discussion with Willis, Dees and three of the five women featured in the film: United Way of Southeast Louisiana EVP/COO Charmaine Caccioppi, United Way of Southeast Louisiana attorney Kim Sport and New Orleans Family Justice Center director Mary Claire Landry.

The panel delved into the progress made to date and the outlook for the future. The women explained how though they had succeeded in passing 60 provisions in Louisiana domestic violence law, progress can only be realized if judges, police officers and the general public fully understand the reforms, underscoring the need for education and raising awareness. Between hosting informational workshops and leveraging the media to get the word out, the ardent women provided encouraging insight to screening attendees, inspiring action and participation on different levels.

“Domestic violence is a cancer that attacks all communities,” noted Caccioppi. “We are still in great need of the financial resources needed to treat the illness and help the families impacted.”

At the reception following the screening and panel, the filmmakers and film subjects connected with the affected audience members, sparking conversations surrounding how both on an individual level and on a industry level, women can become involved in championing similar legislation across the country.

“Women in the fields of broadcasting, marketing and advertising have been instrumental in the progress of these kinds of initiatives and driving their awareness,” said Dees. “By leveraging their creativity and expertise, they have the ability to spark and drive these kinds of movements.”

Five Awake received the award for “Best Documentary Short” at the Los Angeles Independent Film Festival and is scheduled to screen as part of the festival program at the New Orleans Film Festival on October 18th at the Orpheum Theater. Five Awake was just chosen as the “2016 Louisiana Feature Award” recipient, which also includes a prize of $10,000 worth of Panavision film equipment to be used on a feature project. The film has also been screening at universities nationwide, extending the educational reach of the documentary to help pave the way for future political advocacy.

The half-hour documentary also features interviews with Louisiana State Representative Helena Moreno and Louisiana Coalition Against Domestic Violence executive director Beth Meeks, who were unable to attend the screening. The powerful film not only portrays a look at these women’s determination to affect real change in a complicated political system, but also provides a blueprint for future generations of activists to empower themselves, have hope and push for progress.