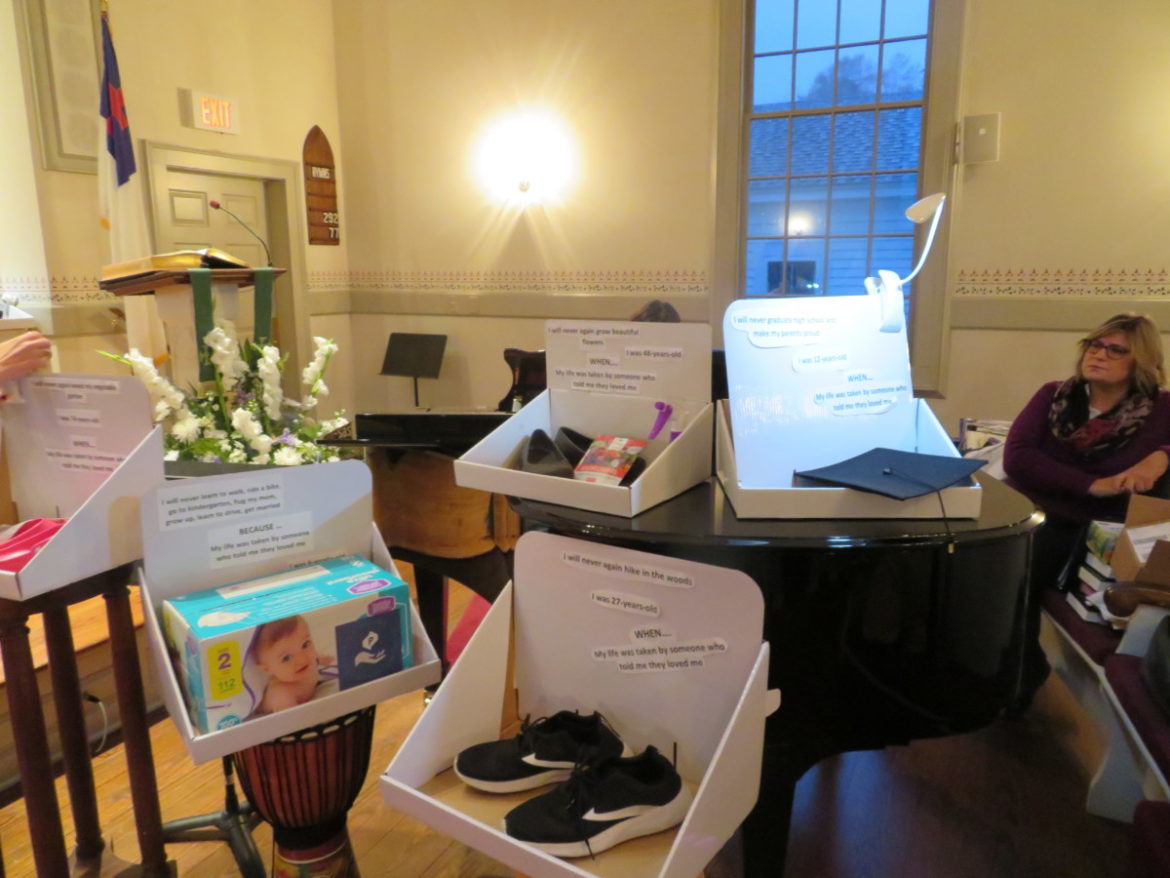 A domestic abuse survivor made this display to honor each of the 23 Connecticut residents who were killed in the past year. It was set up at The Center for Family Justice’s annual Domestic Violence Awareness Vigil at Monroe Congregational Church Wednesday evening.

Domestic abusers killed 23 women, children, and some men, in the past year. A display inside Monroe Congregational Church honored each one during The Center for Family Justice’s annual Domestic Violence Awareness Vigil Wednesday evening.

One box near the alter had a pair of shoes, a packet of wildflower seeds and a spray bottle. A message read: “I will never again grow beautiful flowers. I was 48-years-old when my life was taken by someone who told me they loved me.”

A display for one of the youngest victims contained a box of diapers. “I will never learn to walk, ride a bike, go to kindergarten, hug my mom, grow up, learn to drive, get married, because my life was taken by someone who told me they loved me. I was 6-weeks-old.”

The moving display was created by “Ruth,” a survivor of domestic violence who lives in the area.

In a solemn portion of the vigil, those seated in the church pews held purple light sticks, while a line teenagers took turns at the pulpit, reading a victim’s name aloud and how they were killed, sharing tragic stories of shootings, stabbings and beatings.

“Each year, this is the part of the vigil where we hope to have no names to read,” said Debra A. Greenwood, president and CEO of CFJ. “We have 23 this year.” Thinking of next year, she added, “there are nine in Connecticut already.”

The Center for Family Justice, headquartered at 753 Fairfield Ave. in Bridgeport, has a mission of “breaking the cycle of abuse and violence — domestic, sexual and child — by providing services that create hope, restore lives and drive social change through education and community collaboration.”

Greenwood said she looks forward to the day when awareness is high enough to put an end to abuse.

“That’s the future of how we go out of business, because that’s our goal,” she said, “to make sure we are going to be those individuals who pass this message on to change the culture, to change the behavior.”

But the country has a long way to go. Greenwood said one-in-four women were affected by domestic abuse, but now it is one-in-three — and one-in-seven men experience some form of abuse.

Maiolo said there are more good people in the world than bad, and everybody standing up to abuse is the best way to make change.

Kellogg thanked Salvatore and his police officers, Community and Social Services Director Henna Ali and all of the staff members and volunteers for CFJ for assisting victims of domestic violence.

Greenwood expressed her gratitude to law enforcement in Monroe, explaining how domestic disturbances are the most dangerous calls police officers go to because of the high emotions, unpredictability and cases where weapons are involved.

She praised Monroe police for connecting abuse victims to CFJ for assistance.

Salvatore said domestic abuse affects every community. In Monroe, he said police respond to 125 to 150 domestic disturbance calls a year with around 20 percent resulting in arrests.

It doesn’t have to be a broken arm or a black eye, Salvatore said, adding sometimes abusers damage their partner’s property as a form of intimidation.

“I’m an ardent supporter of The Center for Family Justice,” Salvatore said. “They provide us with assistance with domestic violence and sexual assault cases. They are an asset and a resource that can’t be replaced.”

The chief is involved with CFJ’s White Ribbon Campaign, a global movement of men and boys working to end male violence against women and girls.

Salvatore said he is proud of the high turnout among male Masuk High School students participating in the annual Walk A Mile In Her Shoes event to raise awareness and end violence against women and girls.

Greenwood said abuse often starts when teenagers are dating in high school, using the example of a boyfriend wanting to track his girlfriend’s movements. “You may think, ‘he must really love me. He wants to know where I am all the time,’” Greenwood said of the controlling behavior. “No. Not cool.”

The vigil’s featured speaker was Ruth, a woman who experienced two decades of abuse from her husband. She compared waking up with him every morning to being face-to-face with a prison guard, not knowing if she would survive another day.

When she married him, Ruth said her husband was a loving, caring man. But then she was surprised the man who loved her would mock her education, her family and her friends.

Each time he blew up at her in the beginning, Ruth’s husband would apologize profusely and give her flowers and other gifts. But then he would convince her his bad behavior was all her fault, using excuses, denials of abuse and accusations that she was exaggerating.

He would be jovial and polite in public, resembling the man she had married, but when they got home, he would turn into a stranger.

“I was no longer allowed to see my family, to go out nights and weekends or to talk on the phone in his presence,” she recalled. “All of the attention had to be on him.”

When she would go out, he would tell her he hoped she drove off a curb and broke her neck and there were times he threatened to beat her with a hammer.

“The tiniest thing would send him into a rage,” Ruth said. In one example, she said he flew into a rage when he went to do the laundry and there was one drop of detergent on the bottle from the time she last used it.

When her husband would fall asleep, Ruth walked as softly as she could, because one of his criticisms was that she walked too heavily on her feet, “because she was so stupid.”

Greenwood said people often say of abuse victims, why doesn’t she just leave him? But said there are often factors at play, such as worrying over the safety of the children or a pet, or not having the financial means to move out.

When Ruth finally left her husband, she contemplated going back. “I thought, ‘if I were a better wife and mother and go back, it will work,’” she recalled.

Then a friend suggested Ruth go to CFJ. “I thought, ‘I’m not an abuse victim. The people at The Center for Family Justice are nice, but they don’t know what a nice man my husband used to be.’”

Ruth said she was treated with compassion, respect and kindness at CFJ. “They told me it wasn’t my fault and that I deserved respect, that I deserve a better life,” she said.

Ruth divorced her husband, went back to school and is now an advocate for CFJ.