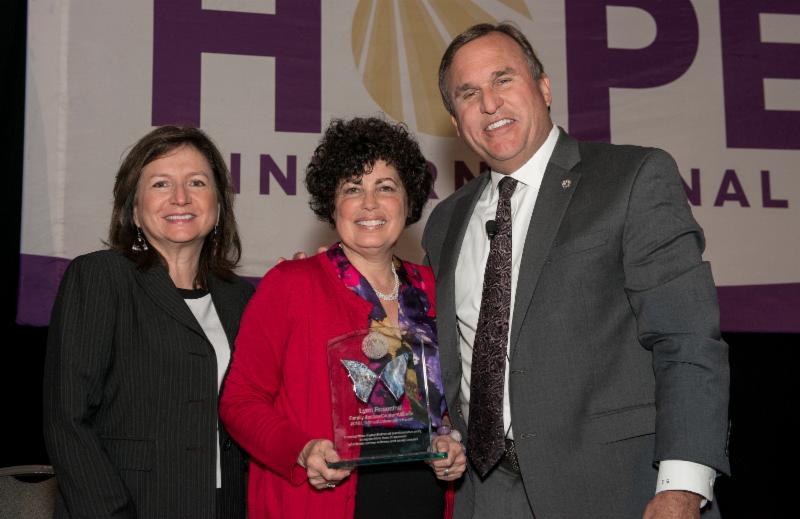 “Lynn Rosenthal’s work has changed the world for millions of survivors and their children over the years. From the trenches of running local advocacy programs to the hallways of the White House, Lynn has always been true to her principles and values,” said Casey Gwinn, the visionary behind the Family Justice Center movement and President of Alliance for HOPE International. “We are extremely proud to honor Lynn Rosenthal and her lifetime of contributions and relentless advocacy on behalf of the domestic violence and sexual assault movements.”

Lynn Rosenthal began her career as a health advocate for women in Florida. She went on to serve as the Executive Director of Refuge House supporting domestic violence and sexual assault survivors in Northern Florida. Her leadership abilities provided a pathway for her to become the Executive Director of the Florida Coalition Against Domestic Violence and the New Mexico Coalition Against Domestic Violence, as well as the President of the National Network to End Domestic Violence (NNEDV). During Lynn’s leadership of NNEDV, she analyzed legislation, built support for federal domestic violence initiatives, and served as a national spokesperson for the domestic violence movement. She played a pivotal role in shaping the philosophical underpinnings of the Family Justice Center movement and advocating for survivor-centered policies and practices.

In 2009, Lynn Rosenthal made history as the first White House Advisor on Violence Against Women working with Vice President Joe Biden and President Barack Obama. She played a powerful role in challenging federal agencies to work collaboratively, advocating for stronger employment policies on domestic violence issues, leading the effort to reauthorize the Violence Against Women Act, and advocating successfully for greater protections for Native American and LGBT survivors. She assisted with speechwriting, policy drafting, and other position statements by the President, Vice-President, and other federal agency leaders.

Lynn Rosenthal has received numerous awards during her incredible career including the first national Sheila Wellstone Award in 2006. Today, she serves as the Vice-President of Strategic Partnerships for National Domestic Violence Hotline and loveisrespect.org and continues to play a major role as an advocate for survivors of sexual assault and domestic violence.

The 16th Annual Family Justice Center Conference brought more than 600 domestic violence, child abuse, and sexual assault professionals to San Diego from 36 states, 10 countries and 10 Native American tribes. The sold out three-day conference focused on creating pathways to hope for victims of trauma and abuse, including intimate partner violence, and included training on the neurobiology of trauma, crucial evidence on brain and body trauma, and the physiology of strangulation and sexual assault crimes. The conference is one of the leading conferences in the country that focuses on the impact of domestic violence on children and evidence-based approaches to change the ending for children and adults impacted by childhood trauma.

“Lynn Rosenthal’s work has saved countless lives by providing a greater understanding of domestic violence and sexual assault. Lynn’s work is ongoing with the National Domestic Violence Hotline, but we cannot ignore the stunning lifetime of accomplishments she has already amassed,” said Gael Strack, Chief Executive Officer of Alliance for HOPE International. “Lynn is a true hero in the domestic violence and sexual assault movements and she continues to set the agenda for our national and international effort to stop violence against women, men, and children.”