Totten, who’s spent his entire professional career with the county, began working in the D.A.’s office in 1981 as a clerk while earning his law degree from Pepperdine Law School.

Among the cases he helped with while clerking were the unsolved 1980 murders of Charlene and Lyman Smith in Ventura.

When Totten returned to the D.A.’s office as a prosecutor after graduating in 1982, the case was still not solved. Though suspects would come and go, the case would go cold from time to time, even as Totten rose through the office’s ranks.

He was named chief assistant district attorney in 1999 and was elected to the office of district attorney in 2002, during which time his team was able to connect the Smiths’ slaying with several murders around the same time throughout the state. The person responsible was dubbed the Golden State Killer.

In 2018, investigators using genetic genealogy identified Joseph James DeAngelo as the prolific serial killer. Totten was invited to attend a news conference in Sacramento that year to announce the long-sought-after arrest of the Golden State Killer. 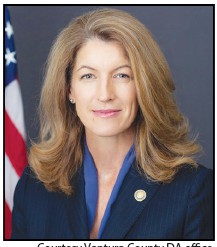 On June 29 of this year, DeAngelo pleaded guilty to 13 counts of first-degree murder as well as 13 counts of kidnappings and nearly 50 counts of rape. On Aug. 21, DeAngelo received multiple consecutive life sentences without the possibility of parole.

Thirty-nine years after he first worked on the Smiths’ case, Totten was there to witness the wrap-up.

The 18-year district attorney announced Nov. 13 that he will leave his position effective Jan. 9—with nearly two years left on his fifth term—to accept the job of chief executive for the California District Attorneys Association, which advocates on behalf of prosecutors to lawmakers in the state Capitol.

Totten said he only recently made the decision.

“Up until probably a few weeks ago, I fully planned on sticking around and perhaps running for another term,” Totten told the Acorn.

The 66-year-old, who formerly served as president of the association and co-chaired its legislation committee for two years, said he was intrigued by the chance for a new challenge, not winning cases in court but trying to win the fight for an effective state justice system.

“I feel like I’ve reached a point where I’ve accomplished most things I’d hoped to accomplish (as a district attorney). It seemed like a good time,” Totten said.

While his new salary was not announced, for fiscal year 2017-18, the latest public information available for the nonprofit association, the executive officer made an annual salary of $171,716 plus $7,255 in other compensation. He’s currently earning around $260,000 a year plus another $75,000 in benefits as the county’s D.A., according to Transparent California.

To fill his position, the Ventura County Board of Supervisors can appoint someone to serve out his term, hold a special election or leave the office empty until the next regular election, Totten said.

Should the supervisors leave the seat vacant, Totten’s second in-command, Cheryl Temple, would assume his duties but not his title, the district attorney said.

In this case, supervisors have indicated they will name a replacement.

Supervisor Kelly Long told the Acorn the appointment will be made in January when the new board members take office.

Long said the board will discuss the process with Michael Walker, the county’s chief civil attorney, during upcoming meetings.

Long praised Totten, whose office decides when and if to bring criminal charges against people, prosecutes cases and provides oversight for police conduct.

“I believe that he has represented Ventura County very well,” she said. “His morals and ethics have served our community extremely well.”

She cited Totten’s stewardship of the Ventura County Family Justice Center as an innovation in the justice system “that is exactly what we need.”

The center, which brings together 35 legal, health and victim advocacy agencies, opened in Ventura earlier this year after five years of planning.

The center is a collaboration between public and private agencies to provide integrated services for victims of domestic violence, sexual assault, child abuse, human trafficking and elder/ dependent abuse, the district attorney’s office said in a statement announcing the facility’s grand opening in January.

When asked to name a characteristic that defines the outgoing D.A., Supervisor Linda Parks said he was compassionate.

“I had no idea how much the district attorney’s office, led by Totten, would be victim advocates,” Parks said. “He has just excelled at that.”

She said the next district attorney will have to strike a balance between prosecuting criminals and giving “criminals an opportunity for redemption.”

Totten said he leaves with no regrets but with plenty of pride in some of the cases his department has prosecuted and programs it’s put into place, including a real estate fraud program that has become a national model, a hightech task force the department operates with the sheriff’s office and the opening of the Family Justice Center and Victims’ Assistance Unit, some of whose advocates have worked with families of the Borderline Bar and Grill shooting victims for the last two years.

Though there are days like those of the shooting that can be gut-wrenching and others that are disappointing, there’s no better job, Totten said.

“I tell young lawyers in the office or young clerks who are still in law school that I literally have never had a day where I’ve dreaded coming to work,” he said. “You have challenges, you have disappointments, but being a prosecutor is one of the best jobs in America.”

Totten and his wife, Irene, will move to Sacramento. But he said they will keep their Camarillo home and plan to return to the area.