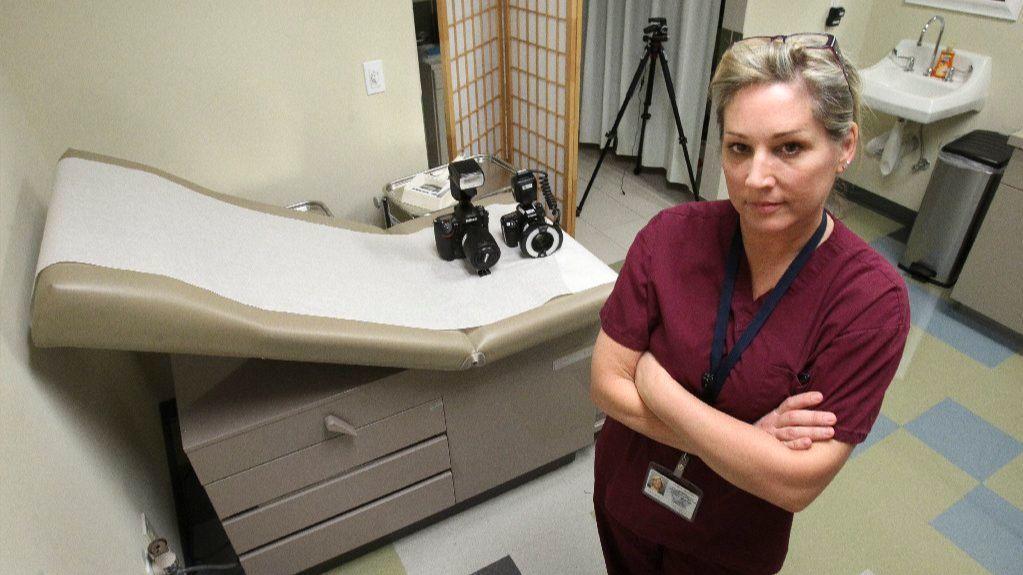 With the cameras she uses on the bed next to her, Karen Marcus, a forensic nurse with Palomar Medical Center, stands in the medical unit where victims of domestic violence are examined at downtown San Diego’s Family Justice Center. (K. C. Alfred – San Diego Union-Tribune).
Click here to see the original story
Lyndsay Winkley/San Diego Union Tribune
In assault cases, when it’s a victim’s word against the abuser’s, medical evidence can make or break a criminal case.
For decades in San Diego County, victims of sexual assault and child abuse have been examined by specially trained forensic nurses who expertly document their injuries to aid in prosecution.

Now, due to a grant from the state Office of Emergency Services, some domestic violence victims will get the same treatment.

“When you’re talking about crimes that are hard to prove, this additional piece of evidence can be the difference in holding an offender accountable,” said San Diego police Lt. Misty Cedrun.

“It’s an opportunity to let the injuries speak for themselves. It’s so compelling,” she said.
The grant will fund 130 domestic assault forensic examinations, which will be conducted by forensic nurses with Palomar Health. Any law enforcement agency in the county can request the service, free of charge.
It won’t be enough to supplement every felony domestic violence case, but it’s a start, officials said.

Nurses will primarily work from three private, clinic-like locations in Escondido, Poway and the justice center in San Diego. But the exams can be performed anywhere they’re needed, including at crime scenes, said Michelle Shores, manager of Palomar Health’s forensic health services program.
The seven-page evaluation was developed by the state in 2004 and includes comprehensive questions about the victim and the assailant. It details the assault, physical and psychological symptoms, and uses diagrams to allow nurses to document specific injuries on the body.
Three exams have been performed since the grant was received in February.
Because there is a cap on how many exams can be done, they will be reserved for domestic violence assaults involving strangulation or attacks that leave behind physical injuries. The exam is voluntary for victims.
Collecting evidence in domestic violence cases can be difficult, investigators said. There are rarely witnesses, and the same deterrents that often keep victims from coming forward in the first place — fear, shame, loyalty to the assailant, immigration status — can cause a victim to minimize or recant what they suffered.
“When that happens, it’s the other pieces of evidence in a case — what we can see, and touch and have officers describe — that become crucial,” Deputy District Attorney Tracy Prior said. “Medical evidence ends up being vital.”
Officers and detectives regularly document visible injuries suffered in domestic assaults, but they are not trained to administer the more comprehensive forensic exam, Lt. Cedrun said. There are also limits to what police can collect in the field.
For example, if a victim said they defended themselves from their attacker, an officer is not likely to take fingernail clippings to check for DNA, which may later be used to support that claim. A forensic nurse will.
“The (forensic exam) is injury documentation on steroids,” she said. “It really elevates evidence collection to a whole new level.”
But investigators stressed the exam isn’t solely to bolster prosecutions. It’s also about validating a victim’s experience and providing much-needed support.
An advocate for the victims, someone from the Center for Community Solutions or similar group, will be available while the exam takes place. They will ensure victims are comfortable and assist them in whatever steps they choose to take next.
This could include finding a shelter to move into, or filling out paperwork for a temporary restraining order or getting counseling for children who witnessed the violence.
Locations where many of the exams take place are also specially designed — from the demeanor of employees to lighting and decor — to sooth victims, many who are experiencing an acute physical and psychological crisis.
“Our spaces and our protocols are designed to put victims at ease,” Lt. Cedrun said. “We want to create a setting so comfortable that it reduces their anxiety and fear and trauma. Our first priority is that they feel cared for.”
When funding for the program runs out, officials hope community leaders will see its value, and find a way to support it.
Tracy Prior at the DA’s office said if it helps bring truth to domestic violence cases, “then we’re going to want to try and find a way to keep this going.”